10 Bad Reasons Not to Vaccinate |
AD 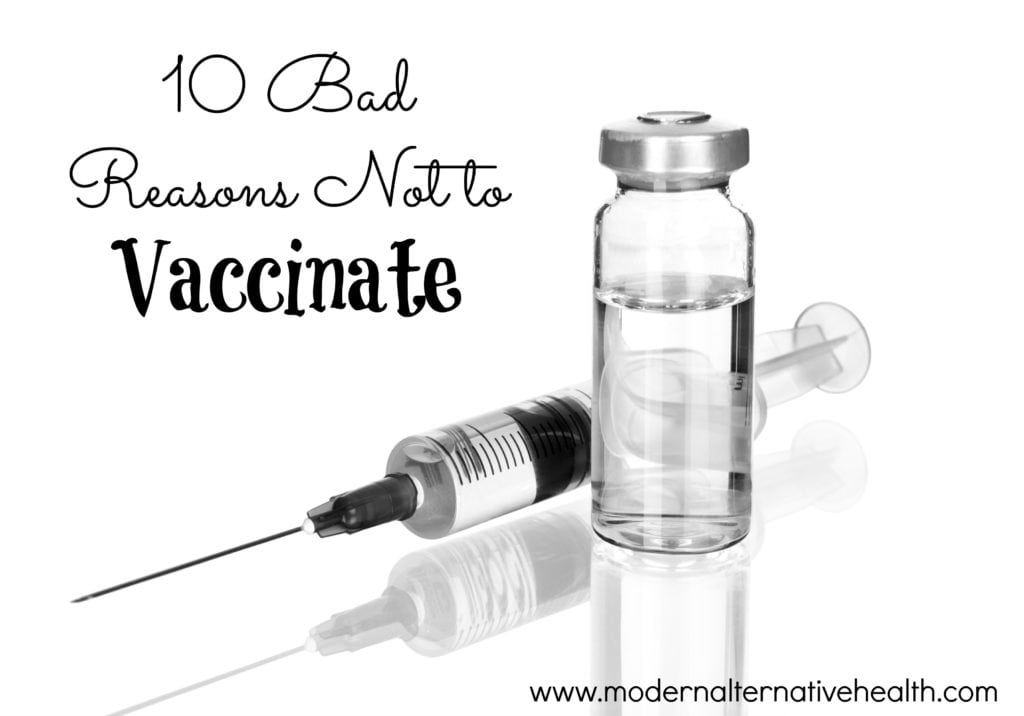 10 Bad Reasons Not to Vaccinate

My new series on vaccination wouldn’t be complete without this post.  While I strongly believe, personally, that vaccination isn’t the answer, I more strongly believe in making an informed choice.  I don’t think that choosing to vaccinate, or not to vaccinate, is something one should take lightly.  No — it’s important to do research and to know that you feel 100% confident in the decision you are making.

With that said, I need to share some “bad reasons” to choose not to vaccinate.  Even if these aren’t you major reasons for making this decision, please pay attention.  If you say these in an argument with a pro-vaccinator (and I advise you not to even get into that argument to begin with, but it happens), you will lose.  Don’t say them.  They’re weak and some of them are actually false.  I see them being mentioned all the time, though, so I want to address that.

Bad Reasons Not to Vaccinate

1) Those diseases aren’t around anymore, so we don’t need to bother.

It’s true that diseases like measles are not common anymore.  But children do still get them, as any pro-vax person would be quick to point out.  If you don’t vaccinate your child, you need to understand that your child may, in fact, catch the measles — or mumps, or pertussis.  It can happen.  And you need to be willing to accept that risk, and know how to mitigate both the risk of infection, and the risk of complications.  I don’t believe that most of these illnesses are really terrible in most cases, and I know different ways to boost my kids’ immune system and potentially treat the illnesses, should they occur.  It’s blase and foolish to think that your kid simply won’t get sick because it’s not common.

2) Everyone else vaccinates, so I don’t need to.

They’ll smack you right in the face with herd immunity and selfishness.  Which are two good responses to that reason (though none of it is particularly compelling).  Your decision to vaccinate or not should be based on what you feel will help your child be the healthiest as an individual, not what the rest of society is or isn’t doing.  Thinking that herd immunity is real and that you will ride on the backs of others who are vaccinated is very foolish, indeed.  (We’ll talk more about herd immunity and why it’s not all it’s cracked up to be soon.)

3) Those shots will give you autism.

This does happen, and for families who have children on the spectrum, this plays a role.  However, there are many, many other effects that vaccines can have, and you should be aware of those, too.  If you’re choosing not to vaccinate only because you heard a rumor that vaccines cause autism — and don’t understand why, or what else is an issue — you haven’t done the research yet.

4) My friend/neighbor/cousin’s kid got a shot and was permanently damaged/killed.

That’s really tragic.  But you probably don’t know the whole story — was it just the vaccine, or were there antibiotics, allergies, autoimmune, etc. involved too?  Relying on “that one story” is a scare tactic, an emotional response, plain and simple.  If that’s the story that motivates you to begin your research, great!  If that’s the story that makes the final decision for you, not so great.

5) Those shots are eugenics/a conspiracy by the government to hurt and kill us all!

Okay, we’re all accused of being conspiracy theorists no matter what, since we’re stepping outside the mainstream.  Don’t make it worse by saying alarmist things.  I believe the truth is that the doctors and researchers are completely fascinated with what science can do, with the possibility that different types of chemicals can change how our bodies react to environmental stimuli (vaccines prevent illness, antibiotics kill it, hormones prevent pregnancy, etc.).  They are searching for ways that they can improve our lives by helping us to avoid these things that are “annoying” or potentially harmful to us.

The problem is, they are so interested in this possibility that they don’t fully consider the unintended ramifications of messing with nature.  These don’t become apparent sometimes for months or years.  They’re also — like many on the anti-vax side — so wrapped up in their worldview that they automatically dismiss information that doesn’t support their position, and they trumpet research that does.  It’s called confirmation bias and we all do it.  They mean well, and I don’t think it’s ultimately a conspiracy.  I do believe that because they think it is such a good idea, that they let the government and the pharmaceutical companies get a little carried away in their recommendations. …or any other celebrity or single person.  Don’t make a decision so important because your friend, neighbor, mom, or even doctor told you to.  Read for yourself, come to your own conclusion.

This is an okay place temporarily, while you do some research and make your final decision.  It’s better to wait than to start and wish you hadn’t.  However, there is a lot of responsibility that goes along with not vaccinating (being able to recognize symptoms of disease, knowing how to treat it, knowing how to boost your child’s immunity naturally through diet and alternative medicine, etc.) and if you are just in a place of “I don’t know,” you’re not going to proactively take those precautions, and you’re leaving your child vulnerable. It is so, so important to protect your child’s health through nutrition.

Cost should never be the decision-making factor in any health or safety issue.  Would you skip buying your child a car seat because you can’t afford it?  Don’t skip vaccines for that reason, either.  Cost is going to come into play in any decision that you make, because you will still need to take your child to a medical professional, and you will need to get vitamins or medicine at some point.  Not to mention the cost of healthy food!  Any option is going to cost you — so don’t let that be a reason either way.

Nobody does.  But sometimes we have to do things that will cause them pain, for their own good.  I once had to hold my daughter down (she was about 18 months at the time) to get blood drawn for a test.  That test was critical for us in figuring out what issues she had, and solving them with GAPS.  But, I wouldn’t have known if I hadn’t gotten that blood draw.  She screamed, she cried, and she got over it.  The decision you make must be for your child’s health and well-being, not with a mind towards momentary pain and suffering.

10) Those shots are just useless/water/have no effect.

Those shots are full of heavy metals (aluminum), preservatives, and biologic material.  They’re going to do something.  Whether or not they have the intended effect, or if they do it without causing more problems than they save, is the issue.  I believe vaccines are ultimately ineffective, but I don’t think dismissing them out-of-hand as “cause no effect” is smart.  It’s more important to look at how they actually work, what they actually do in the body.  On a related note, in an argument, it’s not smart to say “it was just nutrition and sanitation” without any follow-up.  I believe this is true.  But there’s a lot more to it than that (i.e. serious complications dropped off, but cases often did not — it’s a critical point).

That’s a summary of what not to say!

What you should gather from this isn’t that vaccination is a great idea.  That’s not my intention.  What you should gather is that vaccination is a complicated decision, and there are no simple answers and no simple reasons.  It’s a complicated look at diseases, risk/benefits of each situation, how the immune system functions, etc.  We’ll be talking more about those issues soon!

What is the worst reason not to vaccinate that you’ve heard?