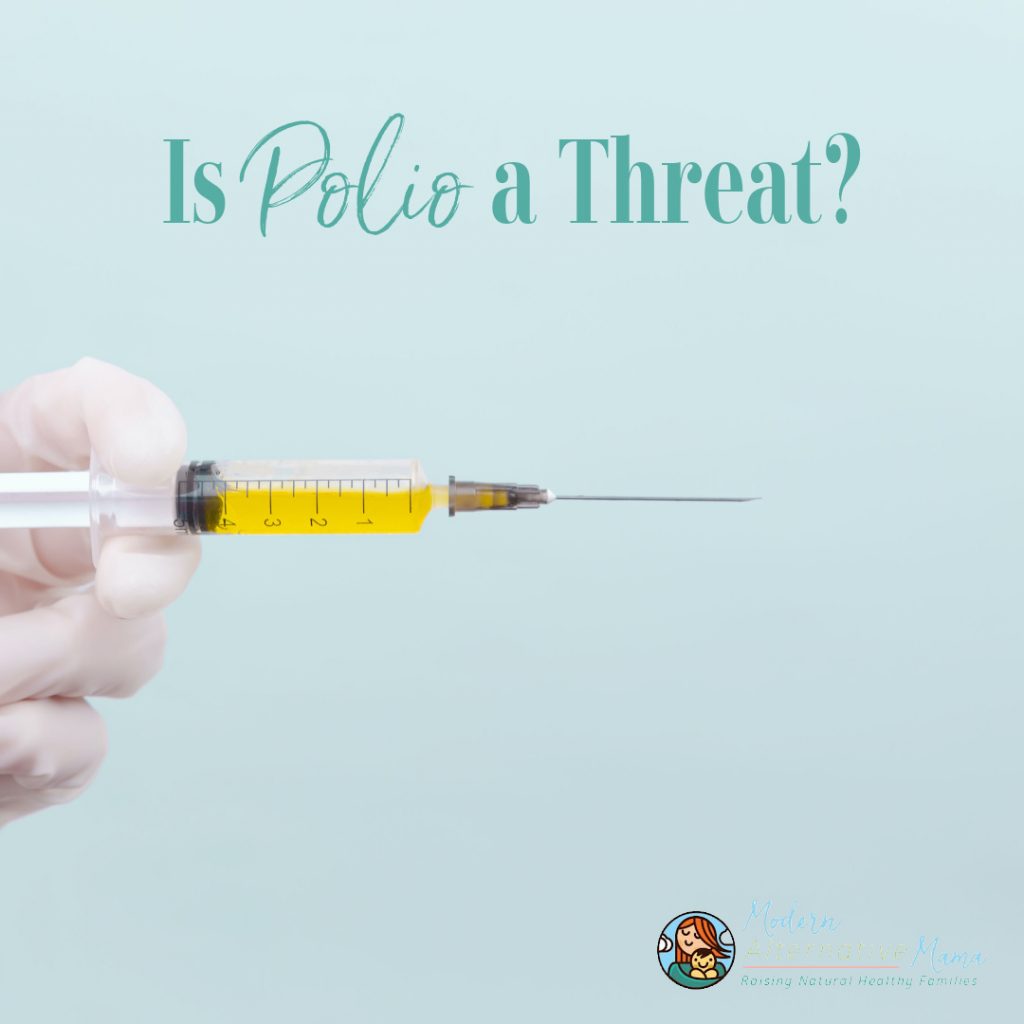 Is Polio a Threat?

When talking to parents about vaccine choices, one of the most commonly mentioned illnesses is polio.  Even parents who are generally hesitant about vaccines, and who opt to skip several, often choose to get the polio vaccine.  The images of our grandparents’ and parents’ generation suffering paralysis and lying in iron lungs is so horrifying that many parents feel that the polio vaccine remains necessary — they don’t want their children to have to suffer through that.

(By the way, the whole “we don’t know what those illnesses really looked like, therefore we are not afraid of them” argument is so bogus.  Pro-vaccine organizations are constantly dragging up horrifying personal stories and pictures of people with these rare diseases just to scare parents.  We sure have seen the worst-case scenarios.  We don’t, however, have unbiased information about what they usually look like.  This is very sad because we should never use scare tactics, on either side of the argument, to make a point.)

Is it really that scary, though?  If we stop vaccinating for it, will our children become crippled in large numbers and have to live in iron lungs?

Here’s the truth: the worst cases of polio are that scary.  But the vast majority of cases are not like that.

In about 95% of cases, polio is completely asymptomatic: you don’t even know that you have been infected, and you never have any symptoms.  In the remaining 5% of cases (or thereabouts), symptoms are flu-like, mild, and temporary, lasting only a few days.  It’s only one in 200 cases that actually result in any paralysis, or about 0.5% of all polio cases.

Oh.  Polio’s not quite so scary.  (By mainstream research/logic*.)

As for those iron lungs, they’re outdated medical technology, pure and simple.  Doctors today have much more sophisticated machines that they use when someone is struggling to breathe.  So, even if the absolute worst did happen — no, we would not see a recurrence of iron lung machines.

*How in the world could they know that 95% of cases are asymptomatic?  Did they test people who did not show any sign of illness to see if they carried the poliovirus?  This seems to me one more “statistic” that has no scientific proof.

The History of Polio

Let’s take a look at how all this occurred in the first place.  Why are people so scared of polio?  What happened in the 1950s?  Why did cases drop dramatically in the last 50s, after the introduction of the vaccine?

Polio has been described for hundreds of years, but was rare (and many cases prior to the late 1800s are highly suspect — in one case a slightly crippled-looking cave painting was used as evidence that polio occurred in the ancient society…).  Outbreaks consisted of only a handful of cases.  This changed in the early part of the 1900s.  Around 1916, outbreaks started to number in the thousands (9000 cases in New York City).  Oddly, while most illnesses peak in the winter months, polio peaked in the summer months and was nearly non-existent in the winter.  (As a side note, “The March of Dimes” was originally a foundation against infant polio.  It encouraged families to send their loose change to the White House to fight the disease.)

Simply looking at the number of “cases” vs. the introduction of the vaccine certainly makes the vaccine look effective.  But, there’s more to it than that.

In 1954 (and prior), any case of paralysis, no matter how minor or temporary, was considered polio and recorded as such.  Beginning in 1955 (the same year the vaccine was introduced), the definition changed: it had to be confirmed by a laboratory diagnosis of a blood sample, and include lasting paralysis.  Other types of paralysis were more correctly defined as meningitis and other illnesses.  This more stringent definition, of course, is responsible for a large decrease in cases.  It is impossible to say how much effect the vaccine actually had on polio cases. While many sources that discuss this data are no longer viewable online, this study details the history of polio with a noticeable difference in the terms used for reported cases after 1955 (by strains that were identified in 1953). Why Did the Epidemic Occur?

Then, of course, there’s the question: why did polio occur in the first place?  Why did it suddenly become epidemic?  And why was it worst in the summer months, while most illnesses are in the winter months?

The medical establishment basically says “we don’t know,” if they offer any explanation whatsoever.

Other sources have a variety of ideas.  One source says that polio began to appear when lead arsenate, an early pesticide, was used on crops.  In other words, it isn’t contagious (and never was), and was actually a form of poisoning.  Others have pointed to the use of DDT (another pesticide) that caused spikes in cases.  We know now, of course, that lead and arsenic are very toxic to humans, and could easily be responsible for “polio” or at least polio-like symptoms (larger doses can cause paralysis, which can resolve if the toxicity is not too great and if the source of toxicity is removed).  And remember, they did not test most people for polio pre-1955, so we don’t know how many paralytic cases were truly polio and how many were some other type of damage or disease.

In one study, 111 “polio” patients were tested for the presence of polio virus, and only one tested positive.  (This was 1943, if you’re scrolling through that whole page.)  It is so, so important to note that lab tests were not the norm in the 40s and early 50s, so we cannot confirm how many of the “victims” actually had polio.  This experiment proves that.

It is likely that increasing pesticide use played a role in why it became epidemic when it did (as we were experimenting with pesticides and herbicides for the first time, not realizing just how toxic they were), and why it was so rampant in the summer.  Some theorize that the polio virus was involved, but that it was the reaction between the polio virus and the neurotoxins in the form of pesticides that caused these epidemics.  That is probably even more likely.

Supposedly, it was eradicated in 1979.  But was it, completely?

Given that the definition of polio was changed in 1955, post-vaccine, it is likely that what was often considered “polio” back in the 40s and early 50s still exists.  Today we still have:

An interesting side note is that a disease is considered “rare” if it affects less than 1 in 2000 people.  Currently, the “outbreaks” of so-called vaccine-preventable diseases affect far less than this, yet we are told they are basically epidemics by the media!  Very sad.

Polio is not the mysterious, deadly illness it is made out to be.  It is unlikely that it will come back in our country.  The areas of the world where polio is still prevalent have high levels of arsenic in the drinking water (which is not true where we are).  Although we don’t fully know exactly how it is spread, it’s linked to a number of different conditions that are simply not present anymore.  It certainly doesn’t deserve the outright terror that is currently so common!

**This post has been entered in Fight Back Friday at Food Renegade.**

Do you vaccinate against polio?  Are you worried about it?