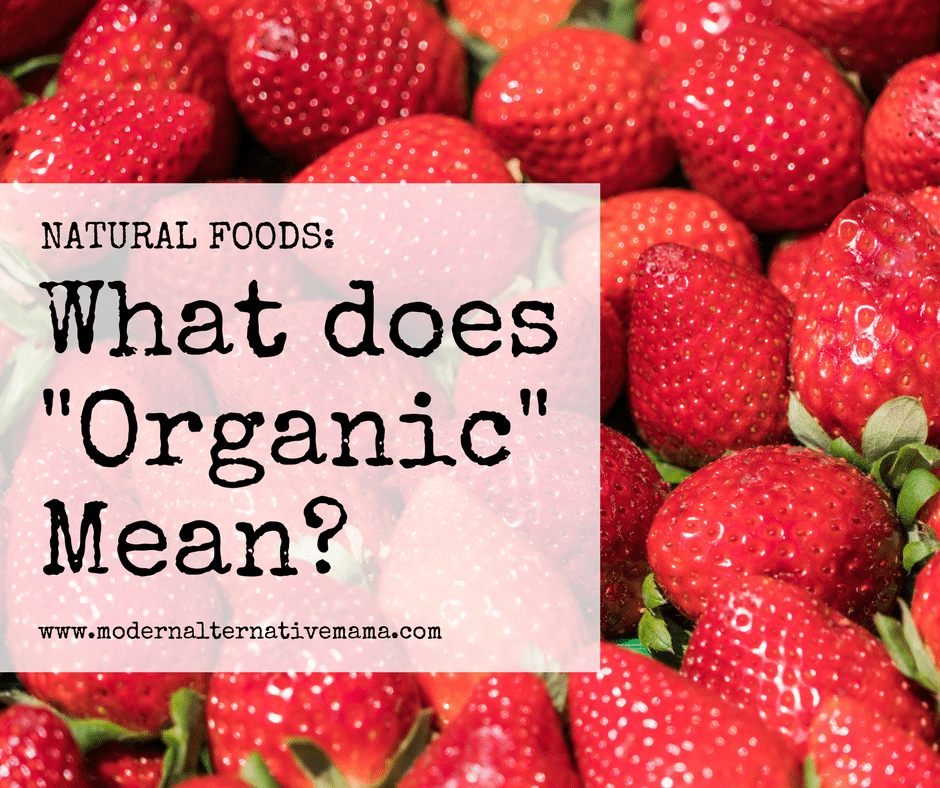 Natural Foods: What does “Organic” Mean?

When we’re buying organic foods from a standard grocery store, how much do we really know about them?  Does “organic” guarantee safety?

**This post has been entered in Fight Back Fridays at Food Renegade!**

Most of us buy organic foods because they’re safer than conventional — they don’t contain harmful pesticides or GMO ingredients.  But realistically, when we’re buying organic foods from a standard grocery store, how much do we really know about them?  Does “organic” guarantee safety?  Especially when it comes to animal products — does it guarantee high-quality food?  And what about organic pre-made foods — are those healthy?

Things are a little more straight-forward with produce than with other organic products.  True organic (certified) farmers utilize a system of crop rotation, cover crops, and other natural methods to grow their crops naturally.  They don’t use modern toxic pesticides.  However, there are certain pesticides and chemical fertilizers that are approved for use in organic crops.  Being organic doesn’t mean that produce is 100% free of any pesticide residue (due to drift and such too).

The bottom line?  Organic produce is a good way to go, especially if you don’t have access to local farms.  It’s a decent indication that what you’re getting is nutritious and free from dangerous pesticides.  I don’t hesitate to buy organic produce whenever local isn’t available, or if it is more expensive.  (When buying local, always ask how it was grown!!)

This is where things aren’t so cut-and-dried.  Organic standards generally specify that animals must be raised without the use of added hormones and antibiotics.  Although sick animals can be treated with antibiotics, their milk or meat can’t be sold until several weeks after the antibiotics have cleared their system.  There is no routine use of antibiotics allowed.

Organic also guarantees that cows must receive some grass.  Typically, a minimum of 30% of their feed must come from grass.  They cannot be fed GMO grains.  But according to the ‘grading’ standards, cows which are fed grass, hay, or silage within 4 hours of milking produce “strongly flavored” milk.  This flavor profile does not match consumer expectations of the taste of milk, so they kind of tacitly encourage farmers to feed their cattle some grain!

Different breeds of cows also require different feed.  Heritage breeds, like Guernsey and Jersey, can be fed 100% grass and still produce milk.  They’ll lose weight in the spring while the grass is growing so rapidly because it’s not quite appropriate for their nutrient needs, but this balances out later in the year.  This is why many farmers supplement with a small amount of grain.  These cows typically produce 4 – 5 gallons of milk per day.

Newer breeds, namely Holstein, cannot live on grass alone.  They are bred to be heavy producers (good for the farmers) and would basically die if they were not supplemented with grain.  Their nutritional needs just cannot be met on grass alone.  They produce up to 10 gallons of milk each day.  This, however, is not natural.

When you are seeking a milk source, please ask your farmer what breed of cows he owns and what he feeds them (and why).  For these reasons, milk isn’t a good product to buy from stores.  There is also the issue that the milk is usually ultra-pasteurized, comes from many different farms, and is packaged in plastic — not much different from regular milk, except that the animals weren’t given hormones and antibiotics.  It’s not enough to make it worth it.  When we traveled recently, we were told we could have organic milk purchased for us — and we refused.  We went without for the few days instead, for these reasons.

(The above information on cow breeds and feeding requirements comes from questions I have asked my farmer.)

It is also common to finish beef cattle on grain.  Even a small amount of grain changes the pH balance in their stomachs, which encourages the growth of E. Coli — not something we want to happen!  (Although only the strain 0157:H7 is truly dangerous, I think that is often what grows in beef cattle.)  The grain, especially if fed throughout their lifetime, completely changes the nutritional profile of the meat, reducing the omega-3s and increasing omega-6s, as well as almost eliminating the CLA (which you want!).  Although the meat is “safer” in that it is not contaminated, and does not contain hormones or antibiotics, it is not nutritionally much different than what you would typically buy in a grocery store.  It usually comes at double or triple the price or non-organic, though.

Eggs are another issue.  They can be labeled “cage-free” or “vegetarian-fed,” but these are no guarantee.  These chickens could still be locked up in a barn with little or no access to the outdoors.  Organic standards usually call for “access” but this can be just a small hole leading to a cement patio — not what we would consider ideal for chickens at all.  I have never purchased eggs from any store — organic, free-range, etc. — that met my standards.  They have all had thinner shells and pale to mid-yellow yolks.  These are not healthy eggs.

In comparison, healthy chickens are out on pasture as much as they desire.  They have a coop, but they have real access to a field where they can eat bugs and worms in addition to their non-GMO grain diets (yes, chickens should get some grain).  The eggs are large with hard, smooth shells, and the yolks are also large and deep orange.  The whites are much thicker too.  I know of no standards set out by any major organic company, nor any health food store, that guarantees eggs of this quality.  Eggs that even remotely approach it (still poorly) usually cost more than $5/dozen.  I can buy eggs directly from a farm for $3/dozen that are much higher quality.

It’s incredibly important to look at animal products carefully before choosing store-bought organic.  Yes, if you have no other options, it’s okay.  That meat is unlikely to be contaminated, is not processed with chemicals, and is not raised with synthetic hormones or routine antibiotics.  It’s definitely a step up from regular grocery store meat.

Since the animals’ diet is of paramount importance, and that is not really regulated by the organic standards, it is uncertain what kind of nutritional quality you will get.  Some farmers contributing to the program may have very high standards; some may not (going instead of the ‘minimum organic standards’).  And when you buy from the store you don’t have much choice, nor the opportunity to ask many questions.  Buying directly from a farm or farmer’s market where you can query the producer directly is a far superior option, and usually cheaper, too.

There’s an entire culture of families that I like to call “mainstream organic” — those who are concerned about what they eat, but not enough to commit huge amounts of time to food — who enjoy buying organic pre-made foods.  And of course, we all go through seasons where we are tempted to buy them or even temporarily need to buy them (I’m about there right now!).

These foods must be chosen with extreme caution.  There are some pre-made foods — say, in-house made salsas from upscale health food stores — that are expensive, but certainly safe and healthy.  Some stores around me offer sprouted beans and grains for purchase.  These types of things are fine, although not budget-friendly.

Most, though — are just junk food in disguise.  Sure, they might be a “step up” from the regular stuff, because they don’t contain bleached flours or hydrogenated oils, and they’re okay for the occasional treat.  It’s definitely better to see recognizable, actual food ingredients on the label.  Real, evaporated cane sugar is better than HFCS.

You cannot go to a health food store and buy pre-made spaghetti sauce (it almost certainly has soybean oil in it, plus sugar and ‘natural flavors’), boxed crackers (lots of white flour, plus sunflower and safflower oils, which you want only sparingly), canned soups (not made with real stock) and so on and think you are really doing your family a favor.  These have fewer chemicals in them (usually), just like organic meat, but they are not nutritionally superior.

With organic pre-made foods, it is best to purchase minimally, using them as a treat or temporarily during a busy/difficult season of life.  Even then, don’t buy things that contain a lot of sugar (no, organic pop and ice cream isn’t healthy) and definitely don’t buy things that are artificially low-fat or contain fake sugars!

Do I buy my kids Larabars and even the occasionally ‘bunny crackers?’  Yes.  But these are a treat, not something we have daily.  Their snacks are built around homemade jerky, nuts, and dried fruit…and on rare occasions, supplemented with crackers or something “fun.”

Is the organic label enough to protect us?  Possibly, if we’re talking about the chemicals in our food system.  It effectively reduces those (although they shouldn’t be there in the first place) and attempts to encourage a more holistic view of land usage and animal raising.  It’s a step in the right direction.

But is it a panacea, the answer to all our problems, a guarantee of nutritionally superior food?  No.  A lot of people believe that it is, but it’s not.  The organic label just doesn’t address nutritional quality, and neither do any other standards I’ve seen out there.  Most of the focus is on animal welfare and reduction of pesticides/other chemicals in the products and environment.

We can help, by voting with our dollars.  When we seek out farmers who do care about the nutritional quality of their products and purchase from them, we’re supporting those who make this choice.  It’s important to keep talking about it, too, so that people see that there is a difference and can (hopefully) make the same choice.  Maybe someday the organic label will even stand for top-quality; who knows.

(It’s also critical to note that there are many farmers who care more about nutritional quality than they do about the organic label and they are not certified organic.  Yet, they raise their crops or animals with more care towards natural methods and excellent nutrition than anything you can find in a store.  Not having the organic label doesn’t necessarily mean any more than having it.)

Do you buy organic?  Why or why not?