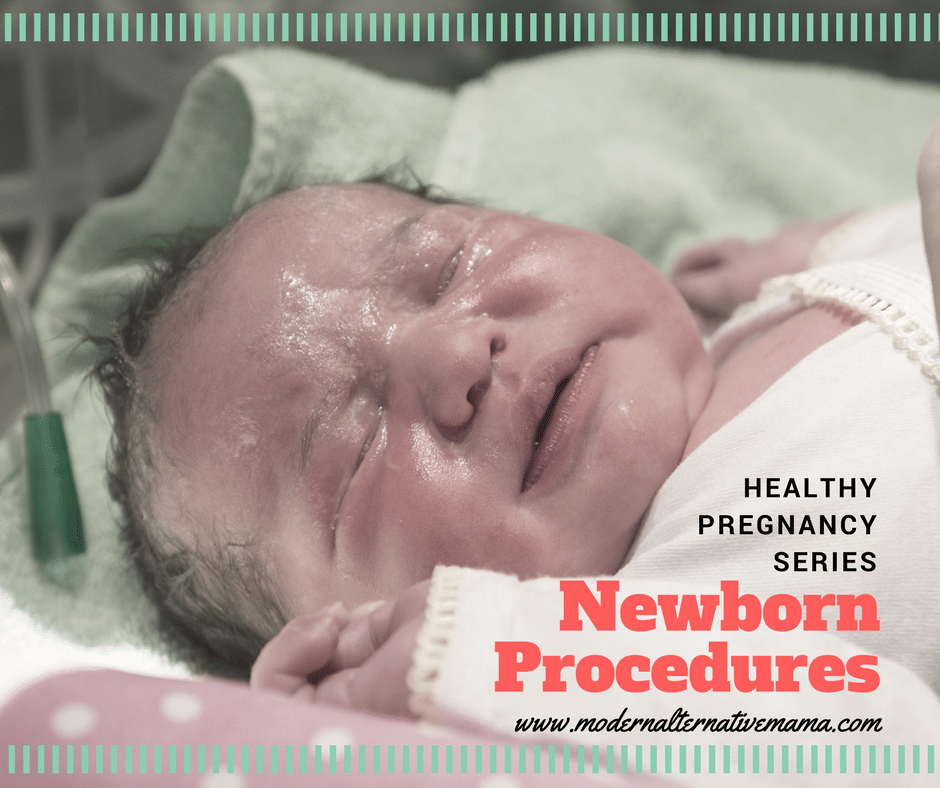 If you’re having your baby in a hospital, there are a lot of “newborn procedures” that are standard.  It is important to know that you have the right to opt out of these procedures if you choose to. You definitely should know why they are done so that you can consent in an informed manner.  What are these procedures, why are they done, and why might you choose to opt out?

After your baby is born, his cord will have to be cut at some point. The exception is if you do a lotus birth, where the cord and placenta are left attached until they naturally dry up and fall off.  In most hospitals, the cord is cut immediately after birth.  However, there is evidence that delaying is healthier for babies.  Some doctors will tell you this is not true; some will even try to say “The blood will all run out of the baby and make it sick or kill it!”  This is ludicrous.

Here are some of the benefits of waiting to cut the cord:

How long should you leave the cord intact?  At least until it stops pulsing, or 10 – 15 min. in many cases.  Longer is fine; our midwives routinely wait an hour.  (And no…not a single baby has died from blood loss or any such thing due to waiting.)

All newborns have their eyes treated with eye ointment unless parents choose not to allow it.  In some areas, they use silver nitrate, but this stings and makes the baby’s vision blurry for quite awhile.  In most areas, they now use erythromycin, which is safer and less irritating.

This treatment was originally put into practice to prevent blindness in the event the mother had gonorrhea.  Rather than testing women and treating only at-risk babies, hospitals decided it was cheaper and easier to just treat all the babies.

If you do not have an STD or other infection, you likely do not need this done.  (I personally find this insulting…because despite that we have no reported STDs, we still are ‘supposed’ to have it done.)

Another newborn procedure is the vitamin K shot.  This one is pretty controversial, even in natural birthing circles.  There are circumstances that could require a vitamin K shot, but giving it to every baby is not really necessary.

Why is it given to babies at all?  Babies are born with naturally low vitamin K levels, which recover to roughly adequate levels by 8 days of age (some think this is why, in Bible times, circumcision was performed on the eighth day — because it was naturally “safer” then.  We don’t personally circumcise at all but that’s another issue entirely).

The danger of having low vitamin K levels is that babies’ blood won’t clot properly, placing them at risk for bleeding out and having a serious problem.  There is also a rare but potentially fatal bleeding disorder (about 1 in 100,000 babies will get it) caused by low vitamin K levels.

Therefore, babies who, are at risk for bleeding for any reason — those who had had a traumatic birth, are undergoing circumcision early on, etc. — are advised to get some type of extra vitamin K to prevent any problems or issues.

Babies who do not get fed within hours after birth, or whose mothers have inadequate vitamin K levels in their breastmilk are at greater risk of hemorrhagic disorder.  Babies should ideally be put to the breast immediately after birth, and mothers should take care not to be deficient in vitamin K at the time of birth.

Since it’s just a vitamin, why not give it to all babies?

So, vitamin K is not as safe as it seems to be.  At least not at such a “mega-dose.”  Babies are better off getting their levels up slowly, as nature intended.

There are other options, however.  Some recommend oral vitamin K supplementation of about 200 mcg per day for 5 weeks.  Others recommend that mothers make sure to ingest vitamin K-rich foods and/or supplements as needed.  Alfalfa is extremely rich in vitamin K, and can be consumed in a pregnancy/nursing tea (it promotes pregnancy health as well as milk production).  This appears to be the safest way to help babies’ vitamin K levels: mothers’ continued supplementation with vitamin K via foods or alfalfa in tea (an infusion is necessary; a basic “tea” which is steeped for a short time won’t pull much of the nutrient out).

Innocuous enough, right?  A simple bath.  But baths at a hospital use harsh soaps to scrub all the remaining vernix off the baby. Plus they aren’t especially gentle (they have to do it fast, after all…).  I learned this from my grandmother, who was a nurse.

There are benefits to not bathing the baby, too.  Leaving the vernix on the skin can help prevent dryness.  There is some evidence that it has immunological benefits too.

Wiping babies off gently and using only water on them until they are a few weeks old is a smart idea.  Bathing at home with a very gentle baby wash is another alternative.

A few moms feel like they cannot bond with their babies well if they are “dirty.” If this is the case, you may consider bringing a gentle baby wash and performing the bath yourself (or asking a nurse to do it in your room) immediately.

What do you do about newborn procedures?  Which do you do, and why or why not?