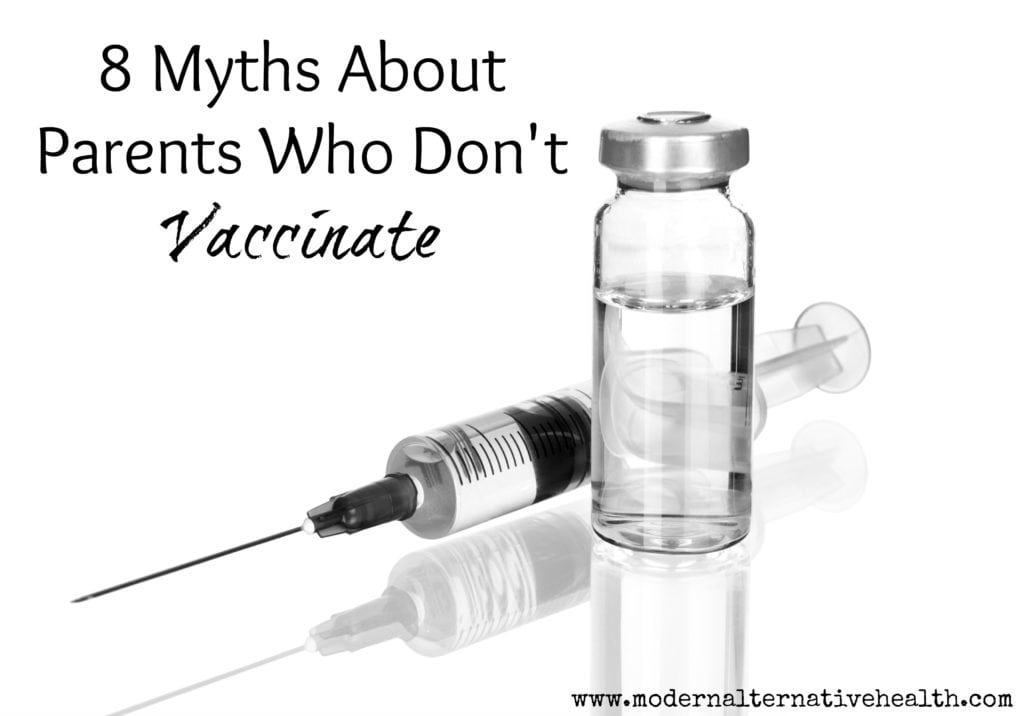 8 Myths About Parents Who Don’t Vaccinate This post is a follow-up to the post I did a few weeks ago on Myths About Unvaccinated Kids.  It’s not intended to convince you one way or another on your vaccination decision, as I believe it is up to each parent to research the issue and choose what is right for them.

However, that can’t happen in the current climate.  Most of the discussions I read, which usually start out with honest questions, quickly disintegrate to misinformation and name-calling — on both sides.  Lots of rumors fly around out there.  Non-vaccinating parents are told they’re “parasites” and much worse.  I can’t speak for the other side (though I know there’s plenty of misinformation about that, too).  But I believe by reacting this way we are only doing everyone a disservice.

So today, I’m hoping to clear up some of those myths about non-vaccinating parents.  And, please, remember: all parents want what is best for their children.  If you enter the debate with an open mind and that belief, everything will go a lot better.

8 Myths About Parents Who Don’t Vaccinate

Here are the myths I’ve heard:

1) Parents listen to the media/Dr. Wakefield study/Jenny McCarthy when choosing not to vaccinate

While this may be the first place parents heard about the issue, it’s definitely not the final word.  Parents who choose not to vaccinate don’t make this decision lightly.  They spend hours upon hours researching every aspect and angle they can find.  Even parents who initially make the decision often feel very uncertain about it, and end up seeking out even more research to verify their decisions.  For many, the media and “celebrities” play little to no role in their ultimate decision.

2) Parents are selfish, relying on those who DO vaccinate for protection while skipping the risks for themselves

It’s important to understand that most of the parents who choose not to vaccinate do not believe in herd immunity.  They also see some benefit to actually catching some of the childhood diseases.  Some actively seek out chicken pox and even mumps or measles!  They do not believe that their children need protection from vaccines, either directly or indirectly.  You will never hear a parent say, “It doesn’t matter if I vaccinate my kid since everyone else does it!”  No…parents have reasons that reach far, far beyond this — and again, don’t believe in herd immunity anyway.

(I, personally, wish that fewer people vaccinated…because I believe if we strengthened our children’s systems with good nutrition we wouldn’t need to, and I’m also concerned, somewhat, about the remote possibility of virus shedding.  I’m not saying anything about anyone’s decision, just pointing out that I definitely don’t rely on or care about whether or not others are vaccinated when I choose what to do for my family.)

Do vaccines cause autism?  We don’t even know the answer to that question.  There are some parents who did stop vaccinating for that reason — 11 years ago, when the study initially came out.  But these days, families on both sides are well aware of the controversy.  It may be what initially sparks a parent’s interest in the topic, but it’s, again, not the last word.  Most of the families who’ve chosen not to vaccinate (at least the ones I’ve talked to) rate the autism at the very bottom of their “reasons not to vaccinate” list — if it makes the list at all.  There are many, many other concerns.

4) Parents don’t understand what these diseases are really like, or they would start vaccinating

On the contrary.  Most parents have carefully researched what might happen should their child catch any of these diseases.  They know what the usual course of the disease are, what complications are likely, symptoms to watch for, and so on.  They know what the true likelihood of complications is, and what causes them (for example, reading the WHO’s disease papers provides this information…and nutritional deficiencies are one of the primary causes of complications).

Parents then set out to boost their children’s immune systems naturally so that should they catch a disease, they’ll be highly unlikely to have any serious complications.  Though they are aware it could happen and they do accept that risk.  The thing is, parents don’t rely on the scare tactics and horror stories…they know what real statistics really say.

In reality, parents’ reasons don’t change when they’ve done full research.  They have many reasons, but those reasons are always the same.  This is an argument primarily used in the vaccine-autism debate.  “First it was the MMR…then thimerosal…then the schedule as a whole…they don’t have an argument!”  Actually, all of these things play a role!  Parents aren’t shifting the blame so much as trying to investigate all possible causes.  If one particular element in and of itself doesn’t explain it, they move on to another to see if that may also play a role (something that the scientists should be doing, too…).

This is demonstrably untrue, and rather rude.  Every study of non-vaccinating parents shows that they are likely to be college-educated with “above average” salaries and steady jobs.  This, of course, mystifies authorities.  It doesn’t mystify me!  Parents in this category are most likely to do their research and make thoughtful parenting decisions, rather than relying on what someone else (friend, parent, doctor) tells them to do.

Many of these parents are not at all what you would consider a “hippie.”  And they haven’t made this decisions because they believe in “hippie ideals,” it’s because they have done careful research.  Parents who choose not to vaccinate may be very, very different in other ways (how they birth, how they eat, how they feed their babies, whether or not the mom works, etc.).  There is no “stereotypical” non-vaccinating parent.

7) Parents are “abusing” or “neglecting” their children by not vaccinating, or they don’t love them

This one really makes me angry.  Please, before you even say such a thing, remember that all parents truly love and want what is best for their children!  No matter how much you vehemently disagree with a parent’s decision, you should never say something like this (and yes…I have had this said to me before).  Parents are very careful to research and think and pray hard before making any major decision.  Not vaccinating does not mean, under any circumstances, that a parent is abusing, neglecting, or failing to love their child.  Period.  To say so is inflammatory and just sick.

8) Parents don’t understand that vaccines save lives, they are too worried about rare side effects.

Parents, again, have done careful research.  Part of that research is into how effective vaccines are, when they were introduced, how disease rates fell before/after introduction, how disease rates fell in other countries that didn’t use those vaccines, reading the VAERS database, and so on.  They’re well aware of how vaccines work and how they’ve been used, as well as what side effects are likely and what serious ones may occur.

Some parents unfortunately choose not to vaccinate after they, or their children are seriously injured by a vaccine.  For them, the “rare” side effects are only too real.  These parents have carefully weighed the risks of the diseases and vaccines vs. the benefit of each…and have found that the risks of the vaccines outweigh the benefit.

What myths have you heard about parents who don’t vaccinate?