The Changing Table: Necessary or No? |
AD 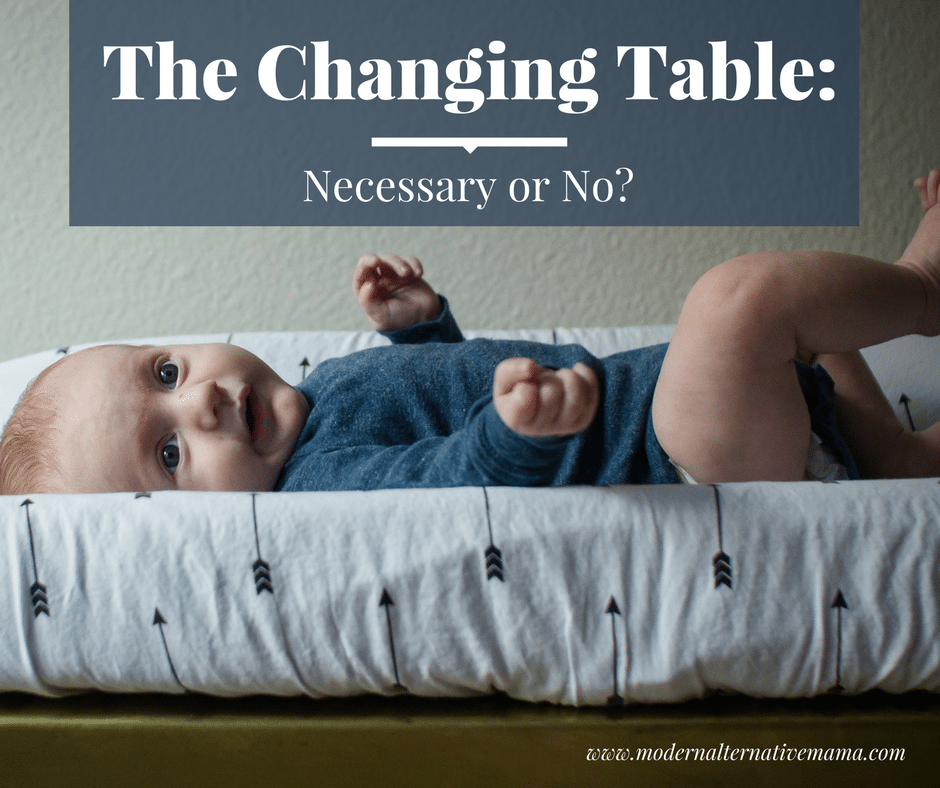 The Changing Table: Necessary or No?

When I was expecting my first baby, I read lots of lists about what babies really need, and what they don’t.  On many of those lists, the changing table was listed as “just not necessary.”  So many people said that they never used it; instead, they’d change diapers on the floor or a bed or wherever they found themselves.  Others said they really liked it, and how it helped them organize things.  My mother had always used one, so I felt like I wanted it.  I bought one and set it up.

I also had a theory that if I changed all or most diapers on the changing table from birth, that I could teach my baby not to fight being changed, as long as she was on the table.  Experienced moms laughed at me.  But, I still believed it.

How did it all turn out?  Now that I’m expecting baby #3, do I really still use one or have I found them useless? Not at all!

Why I Love My Changing Table

I think, with disposable diapers, it’s not that important.  A lot of disposable-diapering moms just have a basket that contains several new diapers, wipes, and cream, and maybe a blanket or mat to toss on the floor to change the baby on.  I think that probably does work fine with disposable diapers because you don’t really have to keep track of them.  You use a new one, and you throw the old one away.  If you lose some new ones, it doesn’t matter; you can use them if they turn up (but since they’re cheap per diaper, who cares?).

But I, like many green moms, use cloth diapers.  That’s a different story, organizationally, than disposables.  You have to know where your ENTIRE STASH is at all times, lest you run out of diapers.  And since they’re not cheap — on average, about $18 each — you don’t want to lose one (or more!) of them.  Since you have to wash them, you need a place — ideally near the changing space — to store the dirty ones.  See where I’m going with this?  You need a designated area for diaper changing that has a place to store the clean diapers, and the dirty ones, plus all the changing paraphernalia.  A changing table is ideal.

I used one constantly until my first was around 2, and running upstairs with both children (my second was 6 months then) every time I needed to change someone became a burden.  Instead, I started just doing “whatever” — changing on beds, floors, etc.  I didn’t have any designated organizational system.  Somehow, during the time I wasn’t organizing my diapers, I lost a few of them (actually I was constantly losing and finding dirty ones — yuck!), I often had dirty ones sitting in the bathroom or near the basement door or in other locations waiting to be taken to a wet bag somewhere, I could never find all the pieces to stuff the diapers properly, I never knew where my wipes were, and I even managed to completely lose two of my wet bags.

I was losing my mind.

Eventually, I moved my daughter’s no-longer-in-use changing table (she’s been potty trained for almost 6 months) to the playroom and set it up.  I put a trash can, lined with a wet bag right next to it.  Ah!  Organization once again.  I also now have a changing station on each floor so my diapers remain organized and there’s no need to go up or down stairs to change a diaper.  It is really necessary to my organizational scheme.

And yes…it did keep my daughter from screwing around and trying to roll away, because she knew that the changing table was for diaper changes, not play time.  That’s not to say she didn’t fuss and fight some around 8 or 9 months, but she definitely never tried to get away.  A small toy as a distraction, or singing a song worked well too.  My son hasn’t *quite* caught on, but he’s still new to the changing table.  A toy works well for him, though.

My changing table, with using cloth diapers, really is crucial to my organizational system.  I need it or I go nuts.  Now I always know where my diapers are, I always have the dirty ones put away as soon as they’re changed (except, occasionally, upstairs…but no one goes up there!), and I always have the “stuff” I need to change a diaper, too.  So much better!

Do you use a changing table?  Why or why not?