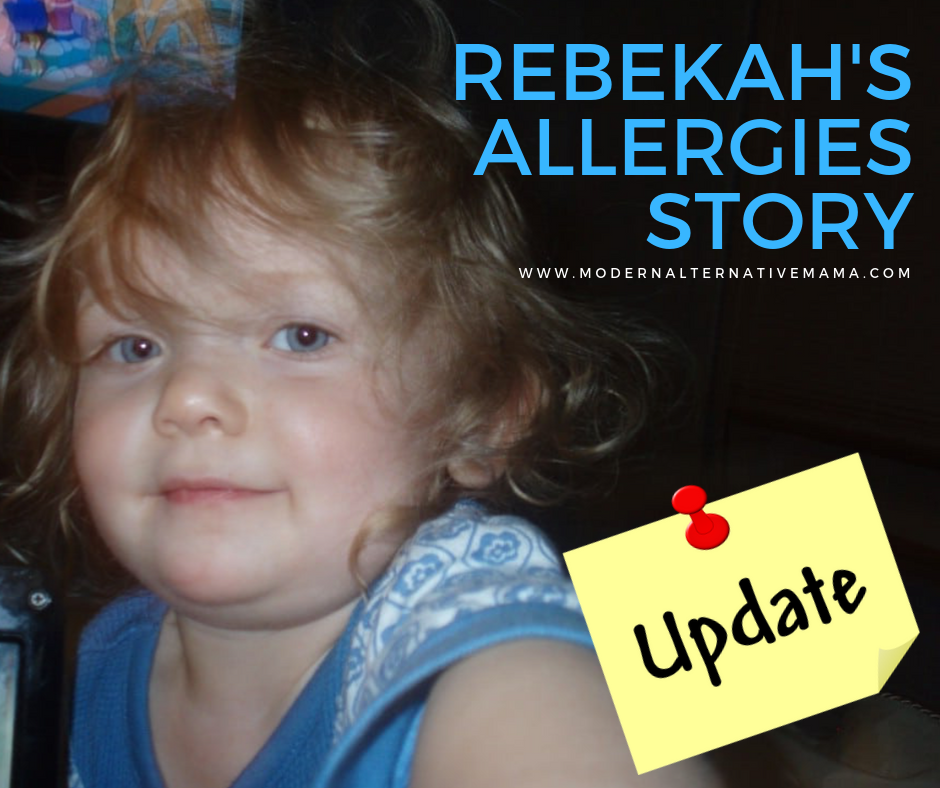 About a year ago, I shared Rebekah’s Story with you.  But at that time, we were still in the middle of many of the things that were going on, including developmental delays in speech.  I did post an update after some tests we had done, but even then it was months before things were done.  And once we were past it, I was able to see it for what it was, more clearly.

And now…it’s amazing.  Amazing how it’s “ended.”  Although it will never completely be done, we are past any danger.

At that time (if you go back and read the story), Bekah was 20 months old and had developmental delays in language.  I know now that when I got pregnant with her, I was extremely depleted, nutritionally.  This was true throughout the first few months of her life, too, when she was exclusively breastfeeding.  This meant that her health was starting out poor, because mine was poor.

We went through months of chronic, terrible diaper rash, no matter what we did to help; awful, constant diarrhea.  She’d wake in the middle of the night and scream for over an hour some nights, and we could not calm her down (from 10 – 13 months).  She had tantrums, could not tell us what she wanted, never learned to say “no” or do other normal things.  She was so excellent in many areas — all her motor skills, for example— but verbally, was behind.  She also had a constant red, itchy rash around her mouth and on her hands.

Bekah said only a small handful of words at a year old.  She started pointing and gesturing around 13 months.  She learned to sign around 17 months and learned more and more signs.  Around 20 months, at the time of my last update, she was still not talking.  Most everything was “mmm da” as she pointed or signed.  No one could understand her.  Getting off dairy, nuts, gluten, fruits, and legumes helped.

We started with the glutathione injections and B12 creams to try to correct her deficiencies.  She immediately broke out in awful eczema, so we quickly stopped them.  The doctor and the nurse disagreed on which was causing it.  We were told to restart the injections as is, and to get a new base for the glutathione cream (a hypoallergenic base) and try again.

We decided not to.

We felt that using these products was only masking the symptoms.  We knew that she was eating, at that point, a lot of grass-fed beef (she was still slowly trying new foods again), which is rich in B12.  She should not have been deficient, yet she was.  That meant she was not able to get it from the food the way she should have.  The GAPS diet, especially being grain-free, was what we felt we needed to do.

So in January, 2010, we went on the GAPS diet.  At this point, Bekah was still not talking.  She still only said a small handful of words and “mmm da” to communicate.  Her mainstream pediatrician became concerned about her developmental delays in language at this point and told us she really should be talking more.  He advised us to say “I don’t understand” whenever she spoke in gibberish or did not use her words.  The few times we tried, she only screamed and threw herself on the ground, because she could not make herself understood.  She was unable to talk.  She was 2 at this point.

It was a tense few months.  Bekah’s peers soared ahead, speaking in sentences and telling stories while she remained basically mute.  (She did sign, grunt, gesture; attempt to communicate; she just did not talk.)  We were on GAPS for about 3 months, after having been gluten-free for 3 previous months, and dairy-free for 6 previous months.

In April, 2010, we started to slowly introduce raw dairy.  She was able to tolerate this.  After this we slowly introduced sprouted grains, too, and she did okay with this.  We had her on an entirely WAP (Weston A. Price) diet at this point.  We’d had all of those months of healing before it.

I feel like it was nearly overnight.  She woke up and started using simple sentences, just one day.  She’d say “Mommy eat apple” or “baby Hee” (Baby Hailey, her friend’s sister).  I really remember when she didn’t talk at all…and when she talked constantly.  She gained language at an incredibly rapid rate.  She started to speak frequently in 3 – 4 word sentences and people understood her more and more.  She finally leaned to say “no” to me!  (How excited I was — at first!)  She was 27 months when she finally started talking.

By 2.5 years, Bekah had caught up in her speech.  She told us stories and talked back and was generally easily understood by most.  She’s remained on a WAP diet, and her symptoms — diarrhea, eczema, screaming, night waking, etc. — are gone.  They return to some degree if she eats things she should not (any grains or nuts that haven’t been properly prepared, food dyes or preservatives or additives).

Now, Bekah is 34 months (she’ll be 3 in January 2011).  People have asked if she’s FOUR because she talks so well now.  She makes up elaborate stories and pretend games.  She knows words people can’t believe: nervous, appreciate, and others.  She can talk her away around anything, too.  If I ask her to stop doing something, she’ll say, “No, I just need to be careful.”  She sings and talks and yells at me!

The other day she said, “Just leave me alone!” and I told her that’s rude and she needed to speak more nicely, she said, “Excuse me, go away.”  ha, as if that’s nicer!  When Ben makes fun of me now, Bekah’s learned the tone of voice I use when I’m mock-offended and she will laugh and say “Daddy’s being mean to you!”

I had to wait so long to hear her talk that I still love (almost) every word that comes out of her mouth.  It’s amazing to see her happy, talking, healthy.  It was at 27 months that she decided she wanted to switch to her big girl bed.  She stopped ever waking at night (she used to wake because her bottom hurt).  She potty trained easily.  She made lots of new friends.  She has absolutely no sign of eczema.

It’s amazing what the GAPS diet has done for us.  As long as we remain on WAP now, we have no problems.  Daniel has none of the health issues or developmental delays in language that Bekah has.  If he does eat something he shouldn’t (and I’m a lot stricter with him), his bottom turns red, he gets a red ring around his anus (very bad sign), and gets fussy.  It’s why I’m strict — I don’t want him to go through what she did.  He’s ahead of where Bekah was on her milestones, and he attempts to talk along with his signs already (he is 16 months).

If your child is suffering from any developmental delays, there is always hope.  Investigate natural healing and you never know what the outcome would be.  People comment now on how well Bekah talks and how happy and energetic she is.  I always smile and think, “If only you could have seen her a year ago!”  The difference is truly amazing.

Have you healed allergies naturally? What worked for you?