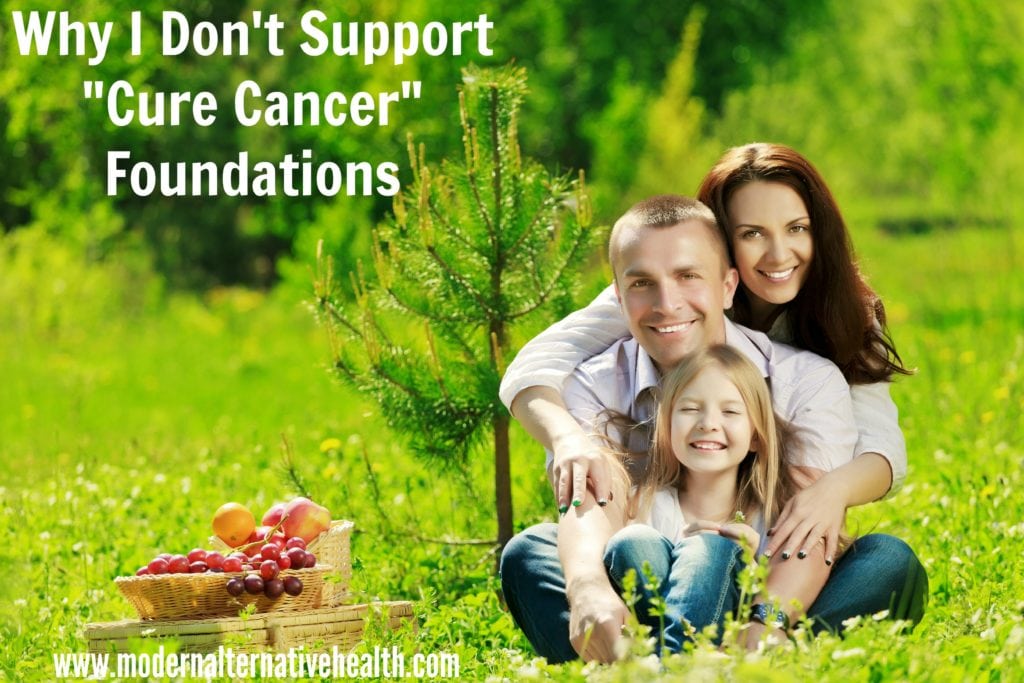 I fully expect that this post (even its title!) will be met with incredible disbelief and very strong opinions.  Some of you, even now, may be reading this and thinking “How on earth can you not support a “cure cancer” foundations?!”

Hopefully you’ll understand my position a little better once I’m finished explaining.  Some of you may even agree me (and some of you…perhaps begrudgingly!).  I feel like this is a really, really important topic, though, so I’m going to write about it.

These days, “Cure Cancer” foundations are everywhere.  There are all kinds of walks and other sponsorship events to raise money for a cancer cure.  Many companies partner with these foundations, offering to donate a portion of their sales to the foundation.  I shudder and walk away when I see this.  The campaign has been referred to as “pink washing” by those who agree with me (because most of the major ones are breast cancer related), and that, sadly, is what it is.

I should note that I do believe many foundations started with good intentions.  But I don’t believe many are still operating under good principles, and I also believe the money is generally misspent.

Let’s look at the Susan G. Komen Foundation first, as it is probably the most well-known cancer foundation.

At this foundation, the president/CEO makes about $532,000 per year.  The COO makes $332,000.  Several of the other top-level employees make between $150,000 and $250,000 per year.  In all, their “employee benefits and compensation” is over $22M a year.  The total amount they brought in was about $159M in 2009, so this means employees received about 14% of the annual contributions.  That seems awfully high to me.  (This information is all from 2009 and was pulled directly from the tax forms available on their website.)

While this is probably typical of all such foundations, I don’t support the ideas that top-level employees in a charitable foundation “need” to make $500,000 per year.  No one really needs to earn that much!  As Ben pointed out while we were doing the research for this post, that’s more than our president makes!  If you believe in the foundation’s mission, that is money that could be better spent going directly to research and programs.  Top-level employees could reduce their salaries to around $100,000 and an extra $3 – $4M could go towards actual research.  I’m assuming that would make a significant dent…

There’s also the problem of who organizations choose as partners.  Last spring, the Komen Foundation partnered with KFC.  While some might argue that a partnership is only to reach people who already patronize that organization (KFC, in this case), partnering with an organization also lends tacit support to that organization.  Does eating at KFC really reduce the risk of breast cancer?  Is buying a bucket of chicken in order to donate money to a cancer foundation really a good use of your money — or your nutrition?

The answer is no.  KFC’s food is absolutely awful for you.  MSG is among the top ingredients in all of their products.  That’s why they’re so addicting!  (No, I have not had KFC in many months.)  A “cure cancer” foundation lending their support and even tacit recommendation to a restaurant like KFC is a terrible idea because eating that food will actually promote cancer.  The organization needs to be much more selective in who it chooses to partner with.  It should be an important part of any cancer organization’s mission to promote a healthy lifestyle that will hopefully not lead one down the path of cancer in the first place.

Does Money Go to “Research,” Really?

This leads to another question: where is the rest of the money spent, and what constitutes “prevention?”  These ideas are related because the money is frequently spent on prevention (as well as research).  Cancer foundation research has led to the following:

These are all mainstream medicine, of course!

Do any of these things really cure cancer?  I would argue no.

The discovery of a genetic link has led to two things: one, that women who find they have it are worrying quite a bit and subjecting themselves to earlier and more frequent mammograms (and probably increased stress), and two, that many women believe that if they have the gene, there is nothing they can do: they are “destined” to get cancer.  This becomes a self-fulfilling prophesy, of course.  Mammograms are radiation, and more exposure to radiation (earlier in life and more frequent) will lead to increased rates of cancer.  Believing that one has no control over her destiny leads to making poor choices because “it doesn’t matter anyway,” which can also increase rates of cancer.

There are those rare people who decide that they are not going to let a genetic link slow them down; they make the best possible choices so that this gene will never be expressed.  That is the best idea!  However I know people who say “I have a family member who had breast cancer…so I’m sure I’m at increased risk!”  What they don’t mention is the family member who had it had a poor diet and lifestyle!  Those things are related!

The Problem with Mainstream Cancer Treatment

Increased mammography is bad, as I mentioned above.  There was a study done where two groups of women were randomly assigned to either get a mammogram every year, or every six years.  It was theorized that, at the end of six years, the cancer rates should be the same in both groups (although the “every six years” group could potentially show more advanced cancers).  However, the group receiving mammograms yearly showed a stastically significant increase in cancer rates.  The theory is two-fold: one, that the increased mammograms were actually causing cancer; and two, that yearly mammograms diagnosed extremely early-stage breast cancer that may have regressed on its own (which does happen).

The real problem is, cancer can never be cured through finding genetic links, increasing screening, and finding new poisons with which to treat it.  That is not a cure!  There is no mention of ways to prevent cancer, such as eating healthier diets (even though new studies saying “broccoli prevents cancer!” “blueberries prevent cancer!” and so on are coming out constantly).  The real research is just not there.  It’s all about detection and drugs.  Even detection is not helping.  That is only finding cancers that already exist.

The true cancer cure lies in preventing it in the first place.  There is no real research being done in this area.  Yes, they say “eating X food prevents cancer!” but they do not really understand why.  Nor will they ever recommend a diet solely of whole foods for cancer prevention.  The vast majority of cancers could be prevented by changing our diet and lifestyle.

To sum it up, I refuse to support “cure cancer” foundations for these reasons:

In the mean time, I will be seeking my whole foods lifestyle in hopes of preventing cancer.  Should I be unlucky enough to get it anyway (yes, I do think some people “just get it,” but it’s a lot more rare than you think!), I will be doing research on natural cancer cures: they are out there.  No, I don’t think I’m tempting the fates by writing this.  No, I don’t look down on families who choose conventional treatment: I think most are scared and honestly don’t know another way.  Yes, I believe our bodies can heal themselves, even of something as big as cancer!

Do you support “cure cancer” foundations?  Why or why not?